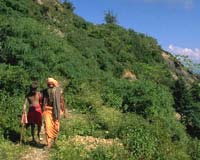 A hermit's paradise; the holy town of Rishikesh in Uttarakhand is home to various tourist attractions. A place where divinity and nature merge and bestow the choicest of experiences, it seeks to be an ideal abode for people seeking piety, serenity and wisdom. Washed by the sanctimonious waters of the Ganges, and encompassed by the rugged terrains of the Himalayas; Rishikesh is the perfect base camp for exploring the majesty of the mountains and conquering the torrents of the river. Spiritual pursuits and adventurous quests form an important part of its tourist influx. Listed below are some places to be included in sightseeing tours of Rishikesh.

Lakshaman Jhula
The hanging jute bridge that was in Rishikesh till 1889 was rebuilt in the form of this suspended iron bridge in 1929, on the river Ganges. According to mythology; Lakshman, the brother of Lord Ram, used the jute bridge to cross the river. Lakshman is said to have performed severe penance at this spot after the death of demon king Ravana. The bridge is now very popular among the tourists, as it gives splendid views of the ebb and flow of the tides below. Another well-known hanging bridge of the place is the 'Ram Jhula' or the 'Shivanand Jhula'.

Triveni Ghat
A well-known bathing spot of the place; it is believed that three mountain streams - Ganges and the subterranean Yamuna and Saraswati converge at this spot, and thus consecrate the place. Thousands of devotees bathe here every morning and evening to purify their souls and wash away their sins; while witnessing the 'Maha-Aarti' that is performed in the evenings. Thousands of lamps are offered and people feed the large fishes in the river. 'Pindha Shraddha', or offerings in the name of deceased ancestors, are also made here.

Swarga Ashram
There is a cluster of ashrams on the eastern bank of the Ganges, and the place is popularly known as 'Swarga Ashram'. Most of these ashrams provide courses on yoga and spiritual studies, and are well-known among the tourists. Some ancient temples with beautifully carved statues are also located in the place. There are a few vegetarian food joints that serve various Ayurvedic food and refreshments. A few shops are also found, that sell various trinkets and souvenirs in the form of religious tapes, books, beads, beaded garlands, shells and clothes.

Gita Bhavan
Near the Lakshaman Jhula, is the newly constructed building of Gita Bhavan. It runs a free Ayurvedic dispensary and also has a branch of the Gita Press, Gorakhpur. There are more than a hundred rooms for visitors and this edifice houses various striking paintings and statues of ancient mythological characters. The stories of the ancient epics- the Ramayana and the Mahabharata are beautifully illustrated on its walls. The place is also popular among the tourists for the various items (sarees, bedsheets, etc) that can be bought there.

Bharat Mandir
About half kilometer from Triveni Ghat lies this oldest temple of Rishikesh. Girdled by a wall on all its sides, this temple is believed to be the place where 'Rabya Rishi' did hard penance. Quite contradictory to its name; the presiding deity of the temple is not Bharat, but Lord Narayana (Vishnu). Though the main site of worship has a black idol of Lord Vishnu; the temple also houses a number of images that are generally associated with the worship of Lord Shiva. The temple is believed to be consecrated by Sri Sankaracharya in the 9th century AD.

Neelkanth Mahadev Temple
Located at a distance of 12 km from Rishikesh, this temple stands at a height of 926m on top of a hill across the river Ganga. It derives its name from Lord Shiva. According to mythological belief; the cosmic churning of the oceans (Sagar Manthan) for the potion of immortality (amrit) by the Gods and the Demons; produced a venomous liquid, which was consumed by Lord Shiva at this place. As a result, his throat became blue in color, which in Hindi literally means 'Neelkanth' (blue throat). The place is a favorite among the religious tourists.

Adventure Sports
Rishikesh is one of the most favored adventure destinations of India. The Ganga and the rugged mountains provide some excellent scope for high adventurous sports. With various facilities for white water rafting, canoeing (kayaking), trekking, jungle safari, camping, rappelling, skiing, etc, Rishikesh provides a huge gamut of excitement for all the adventure lovers. Be it the tourists trying to delve into the Garhwal Himalayas or trying to beat the waves of the Ganges; adventure and water sports of Rishikesh form an important part of its tourist attraction.